The official symbols of Peru are established by law and part of the Political Constitution of Peru (Article 49).

Consisting of three elements: the top left section shows the vicuña, the national animal, on a light-blue field, representing the fauna of Peru; the tree in the top right section is the cinchona tree (the source of quinine, a powerful anti-malarial drug and the key flavorant in tonic water), on a white background, representing the national flora; and the bottom cornucopia with coins spilling from it, on a red field, represents the mineral resources of the country.

The flag of Peru was adopted by the government of Peru in 1825. It is a vertical triband with red outer bands and a single white middle band. Depending on its use, it may be defaced with different emblems, and has different names.

The national or civil flag (Spanish: bandera nacional) is used by citizens. It has no additions to the common form. It was changed several times; before 1950 it looked like the current national flag and was used as both the civil and state flag, when General Manuel A. Odría removed the coat of arms from the national flag and created the state and war flags.

The national ensign or state flag (pabellón nacional), used by state institutions, is marked with the coat of arms of Peru (escudo de armas). It is used during ceremonies in which the flag is hoisted in the presence of spectators (as opposed to a static, permanent flag). A form of this flag, the national standard (estandarte nacional) is used indoors by official and private institutions. 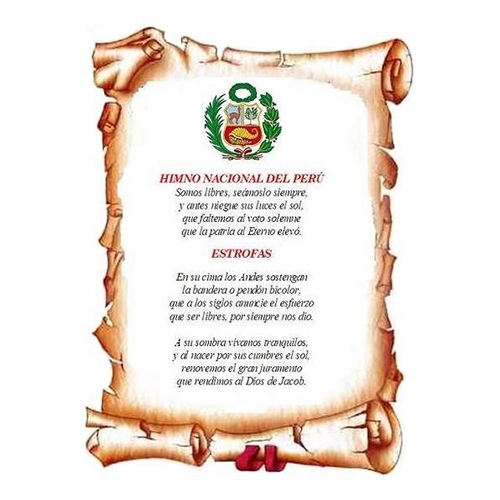 After Peru declared its independence, the general José de San Martín began a public contest to select the National March, which was published on 7 August 1821 in the Gaceta Ministerial (the Ministerial Gazette). The contest called upon professors of poetry, composers and general aficionados, to send their signed productions to the Ministry of the State before 18 September, the day in which a designated commission would decide which of them would be adopted as the «National March». The author of the selected composition would be compensated with the government’s and the public’s gratitude.

The cockade of Peru is a popular unofficial symbol of the Peruvian nation. While an 1825 law decreed its characteristics, there is no official regulation concerning its use, and it is not recognised as a national symbol in the Peruvian Constitution. It has the same colors as the national flag: red-white-red. It is often worn as a badge on the chest during Independence Day parades and other events of the day.