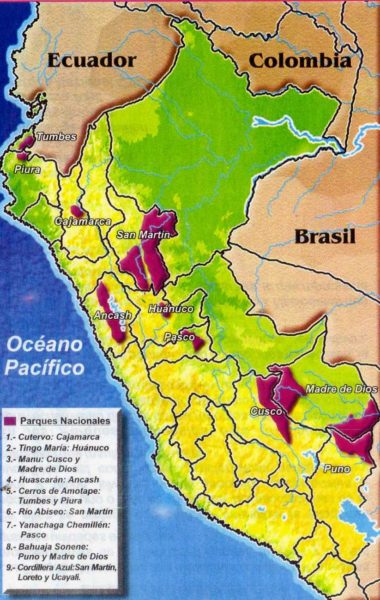 The National Parks are representative examples of the natural diversity and the ecological unities in our country.

In these Parks, the ecological integrity of one or more ecosystems, the flora and wild fauna area protected. In this areas the direct exploitation of the natural resources and the settlement of new population is not permitted.

Visitors can enter these areas only with scientific, cultural and educative goals. Peru has 8 National Parks with a surface of 2,918,179,25 hectares, which means 2,27% of the national territory.

The historical sanctuaries protect places containing relevant natural value and constitute places with a special meaning as in this area have happened very important historical facts.

This areas have a surface of 35 392 hectares that represent 0,028% of the national territory.

Historical sanctuaries – or monuments – have existed for a long time in the most diverse countries. Establishing them was already an option as part of the commitments assumed by Peru in 1947, when the «Convention for the Protection of the Flora, Fauna and Natural Scenic Beauty of the Countries of the Americas», approved in 1942 by the Pan American Union (OAS), came into force in the country. Indeed, Article I, paragraph 3, of that Convention establishes, among the motives for creating national monuments, sites of historical interest[i]. But, as is well known, the nation waited until the 1960s and especially the 1970s to begin to apply the concepts of that Convention.

The Historical Sanctuaries are: